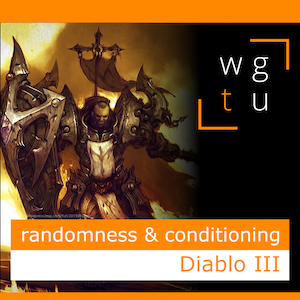 Let’s see how Blizzard’s well-known action RPG uses randomness to hook us in!

First things first, don’t forget that if you have some ideas of your own for future WGTU videos, either a topic or a game you’d like me to discuss, you can leave a comment on YouTube, contact me on Twitter or send me an email (at mina.pecheux@gmail.com) 🙂

It’s always great to exchange with the community and I think it’s really cool we can build this series together, so feel free to share your thoughts!

And with that said – let’s dive in, and discuss a bit how randomness can trick our brains big time, and how some video games even rely on it to keep players hooked in!

The psychologist and the pigeon

Now – the story I’m gonna tell this time is pretty famous, so you might have already heard it. In the 1930s, there was a psychologist named B. F. Skinner who took a real interest in conditioning and tried to go further than what Pavlov had done. Basically, using pigeons, he discovered that thanks to randomness, you could condition not only reactions but also volition itself.

This way, you would go from Pavlov’s classical conditioning to Skinner’s operant conditioning.

Ok – before I dive in deeper, I just want to say something important: I don’t agree with all of Skinner’s work. Even if I believe he was spot-on about some things, such as the unique place of science in our societies, I also feel like his relationship to authority and his idea of conditioning were too extreme and go far beyond my comfort zone… So, yeah: keep in mind that I’m going to talk about an experiment he did because it clearly demonstrates a phenomenon that is interesting for today’s episode, but also that Skinner should definitely not be blindly taken as gospel…

But anyway: in 1948, Skinner published a famous article in the Journal of Experimental Psychology called “‘Superstition’ in the pigeon” with various experiments where he’d put a pigeon in different boxes with different mechanisms and study its reactions.

Among those experiments, in particular, there was one that was quite simple: suppose we put a pigeon in a box with a button and a system that delivers food to the bird whenever it taps the button. This is quite straightforward and the pigeon quickly gets the trick: when it wants food, it clicks the button and it gets its reward.

For Skinner, this basic conditioning had a flaw. As soon as it stopped being hungry, the pigeon would stop tapping the button. Skinner wanted it to click even if it wasn’t hungry anymore. To do that, the psychologist discovered that you just had to add some randomness: say you rig the food system so that it delivers food after a random number of clicks on the button. Then, the pigeon would tap on the button regularly in the fool hope that it will give it the reward… and with the fear that this may never happen again in the future. What’s even crazier is that the pigeon will actually try to find some logic behind all this and develop sort of “rituals”, a self-conditioning based on personal superstition.

And here’s the real catch: these results actually transpose to us, too! As human beings, we like patterns and logic; so if we’re faced with randomness, we’ll most probably keep trying until the rules, no matter how crazy they are, become clear. And so we can just as easily be trapped into such a random-rigged mechanism, called a Skinner box, and experience an “illusion of engagement” in the form of compulsion.

This idea of constantly hooking the players with future rewards but at an unsteady rate is why slot machines work, for example: when you win, you get just enough incentive to keep playing, even if you’re then going to have a long strike of losses. Similarly to Skinner’s pigeon, we are duped by the randomness and we feel like we should keep going… until what needs to happen happens, basically.

And of course, this is not limited to casinos – video games have long learnt that they could benefit from this bias in our brains and extend playtime by shuffling around the odds and offering random daily rewards…

Applying this technique to Diablo III

To me, one of the best examples of this technique is Diablo III.

Now, to be honest, the entire Diablo series relies on this pattern, so we could have a larger scope and not focus solely on Diablo III. But it’s the most well-known nowadays and, according to this BGR article in 2012, it was the fastest-selling game of all times when it got released – so let’s just stick with this one.

Diablo III is an action RPG dungeon crawler released by Blizzard Entertainment in 2012. In this game, you are a proud hero that battles the forces of evil be it with his sturdy axes, her powerful magic or even more secret skills.

All in all, the gameplay is quite basic: you have some mouse and keyboard controls to move and to cast your spells, you can kill monsters to get gold and items, you can talk to NPCs to start or end quests and you’ll gradually explore the world and its dungeons to complete the story. And actually, when you’re done with the story, all that’s left to do is re-walk through the same areas, simply to fight bigger and badder monsters, and earn even mightier objects.

This seems pretty repetitive… so how come I spent dozens of hours playing this game? Well the answer is simple: because Diablo is built on a Skinner box.

As you progress through the levels, you’re continuously hoping to get a more powerful item like this unique weapon or this rare crafting recipe. The chances of finding it are slim… but you regularly get lower-tier and yet interesting rewards to keep you searching. And so you run around with this constant thought: “perhaps the thing I want is on the next monster, I’ll do just one more…”

In Diablo, it’s the cleverly designed loot and level-up systems that give the game its lifespan.

And one of the main reasons why we don’t get tired of fighting for gold, items or experience points is because they leverage secondary needs (like money or social approbation) which are far harder to satiate than primary needs.

Going beyond the video game…

Now – you might feel like this is not a big deal. After all, spending a bit too much time playing Diablo III is not that bad. But the crucial (and somewhat scary) thing is that this false engagement can be created in lots of other situations, for example in our everyday lives, especially with the growing trend of gamification. Today, it’s all about points, and badges, and ranks, and titles, in social networks but also even at work sometimes!

All those rewards are given arbitrarily and, sometimes, randomly – or at least, with such an intricate and high-level set of rules that, from our point of view, with a limited field of vision, it feels like randomness. And so we’re going to keep on playing the game without ever knowing if we’ve properly understood the rules: just like the pigeon, we’re going to create our own superstition.

I’m not frowning on this core principle in Diablo in itself: it is a choice of game design that has its perks, too – when you’ve had a long day and you just want to have fun, this type of games is great because it doesn’t require high focus and it can be played indefinitely without ever running out of content.

But I feel like it’s important to be aware of this inner mechanism so that we can also take a step back and pull ourselves out of the Skinner box from time to time. So when you realise you’ve been playing for half the night, that you’re not even having fun anymore and that you’re just tapping the button mindlessly, then perhaps it’s time to escape the box and go to bed…

So, what if Diablo III, aside from being a nice way of letting some steam out, was also an itchy proof of our oblivious relationship to randomness and conditioning?

And please, tell me in the comments: do you really think this guy is the best choice to battle evil?

I really hope you enjoyed this article – don’t forget to like and share it if you did! And of course, if you have any other idea of games that taught us something without us noticing, go ahead and tell us in the comments!