WGTU #16: Cinematography & storytelling – with A Way Out (EN/FR) 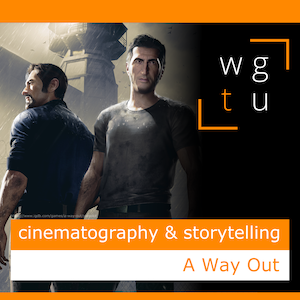 Let’s see how this full-coop game uses tricks from the cinema industry to offer us an emotional adventure!

First things first, don’t forget that if you have some ideas of your own for future WGTU videos, either a topic or a game you’d like me to discuss, you can leave a comment on YouTube, contact me on Twitter or send me an email (at mina.pecheux@gmail.com) 🙂

It’s always great to exchange with the community and I think it’s really cool we can build this series together, so feel free to share your thoughts!

Are video games only about interactivity?

But anyway: remember how, last time, we discussed affordance and we said it was very important for video games, since they rely a lot on interactivity and instinct? We saw that game designers have to use some well-established conventions from either our everyday lives or other video games so that players intuitively know how to react when faced with their creation. So, in that last episode, we focused on a grammar that is quite specific to this media.

However, video games being a multimedia format, and also being pretty recent, they are not limited to this set of rules and they can draw from other mediums. Not everything in these artworks is about interactivity and gameplay and lots of them have dabbled with using other conventions… in particular, there are now plenty of well-known video games that share some common traits with movies.

Playing with a common grammar…

Indeed, as the technology evolved and allowed for more realistic graphics, more and more video games have actually aimed at getting somewhat lifelike characters or landscapes, and eventually started to lean towards the “grandiose and epic dramatic narration” we see in the big Hollywood blockbusters.

So, parallel to the indie games that explore new ideas of gameplay, or that offer a meta-reflection on the world of video games, we now have plenty of famous examples of triple A games that mix impressive visuals and symphonic soundtracks to try and appeal to broad audiences like a film would. The Assassin’s Creed franchise or the Far Cry series, to mention just a few, have had their ups and downs… but we have to admit that they are visually impressive games that manage to match real-life pretty closely at times!

The thing is that despite this very realistic setting, those games are still very much games, in the sense that they primarily rely on video game tropes and conventions. Be it through the HUD, the NPC replies or the questlines, the players just know they’re playing a video game and not simply told a story as spectators. With those games, the focus is not on the narration but on providing an entertaining interactive experience – and that’s absolutely fine, it is a very common and valid goal for a video game!

Still, there are other games that put the story in the forefront and benefit from powerful tools from the cinema industry to create a unique narration. I find that, recently, a great example of such a cinematographic game experience was A Way Out, a one hundred percent cooperative game released in 2018 by Hazelight Studios.

In this game, you follow the story of two inmates, Leo and Vincent, that need to forge a friendship to break-out and avenge their families.

The importance of the viewpoint

To be honest, in terms of pure gameplay, the game is pretty basic. You only have a few buttons you can press, and there are periodically some story branches to pick from, but nothing too fancy, even if you have various phases of gameplay from stealth to driving, and some nice mini-games. Sure, you have multiple endings to the different puzzles, but overall the scenario of A Way Out is quite linear and it uses a lot of cinema archetypes and clichés, such as the cocky Italian gangster with Leo, or the lone and reserved tortured father with Vincent. So what’s so special about this game?

Well, to me, the real strength of A Way Out is not so much in what it tells as in how it tells it. More specifically, the game was conceived as an “emotional adventure”, as stated by the designers, and it borrows a lot from the cinema to present the players with a coop game that’s different from the others. By playing around with this common grammar, it makes the most out of the two mediums and plunges us in a deeply emotional story of friendship and treasons – and in the end, I really cared for the two guys on-screen!

Ok so: how does the game achieve this?

The first obvious cinema trope A Way Out re-uses is this idea of controlling the spectator’s viewpoint on the scene. Usually, games do this during cutscenes, but let you control the camera during the game phases. Here, even the interactive parts are often staged and depicted as movie scenes, too, with a somewhat locked camera that restrains the player’s freedom and has them simply go through the story step by step.

Deciding on a point of view to give a specific meaning to the scene is essential in any movie. Whereas writers describe with words, movie directors describe with cameras, and lighting, and framing; all of these can convey different emotions to the viewer, and so it is up to the director and the rest of the team to find the best way to put their thoughts into images.

Note: of course, those three tools are not the only ones in the cinema’s team toolbox; there are plenty of other experts on a movie set that are equally important (writers, costume designers, etc.)!

Here, it’s the same: the game shows us the importance of properly directing the shots to keep the action flowing, readable and dynamic. In A Way Out, many scenes have you switch between a limited number of viewpoints for the camera, or even force you to follow the action from one particular spot. This is a conscious choice of constraining the players’ interactivity with the fiction to better control what they see and, in turn, what they feel.

Side-chat: by the way, I feel like this is a new issue that designers and developers will face more and more with the growing trend of augmented and virtual reality. Both those extended reality experiences expect the players to move around the space and choose the viewpoint themselves, and essentially aim the camera to decide on a relevant viewpoint. This means that the app creators accept they won’t have has much control on your experience and that it’s up to you, a member of the audience, to “finish up” with this final layer of direction…

A clever use of split-screens

The second big feature of the game in terms of narration is its great use of split-screens to either extend or energise the action.

Because A Way Out is necessarily played with a friend – it is not possible to play solo –, the devs had to find a technique to bring the two players together on-screen and convey the importance of coop visually.

To do this, they opted for a cinema trick: the split-screen. You know, split screens are these moments where you have multiple camera points of view shown at the same time, side by side. They allow you to show several scenes in parallel, or the same scene from another angle.

In A Way Out, those split-screens are almost always present during the game phases, except for a few rare moments where the two characters are regrouped on the same screen – which also has its meaning in the story, of course! They are crucial to letting both players explore the world while constantly reminding them of this invisible link that’s at the heart of the story, and also to giving them additional info on the other’s actions and needs. Be it with local or remote coop, the game always shows you what your partner is doing and plays with the various points of view to tell you more on the scene.

So, what if A Way Out, out of its clichés and funny twists, was also a great example of how the film grammar can benefit video games and give us a strong narration?

And please, tell me in the comments: did you too spend way too many hours trying to get the highest score possible with the farm mini-games?

I really hope you enjoyed this article – don’t forget to like and share them if you did! And of course, if you have any other idea of games that taught us something without us noticing, go ahead and tell us in the comments!

previousBuilding and publishing a VR Unity game for Oculus with Codemagic!
nextHow to animate and move a simple player with Mixamo and Unity/C#