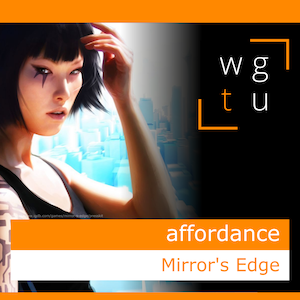 Let’s see how this Dice energised action-adventure game relies on affordance to feel intuitive to players!

Before we start, don’t forget that if you have some ideas of your own for future WGTU articles, be it topics or games you’d like me to discuss, you can leave a comment, send me a message on Twitter or even write an email (at mina.pecheux@gmail.com) 🙂

I’m always happy to exchange with the community and I’m really glad we can build this series together, so feel free to share your thoughts!

And with that said – let’s dive in… and talk a bit about how video games constantly try to trick our brains, but some do so more cleverly than others!

If you think about it, when you play a video game, you are basically telling your brain to overcome the fact that the images you see are just pixels on a screen, and you’re asking it to care deeply for those 2D and 3D shapes it is presented with… which can be a bit hard! As graphics have become more crisp and realistic, this tricking of the brain has become easier – and so, now, we have less difficulties understanding that this is an Italian plumber jumping on a mushroom, but nevertheless: video games are about making completely fake worlds and stories as real as possible.

So how does that even work? How is it possible to have such a strong “willing suspension of disbelief”? Is it just about adding more polygons to get more realistic 3D models?

In truth, lifelike graphics and sounds aren’t required nor enough to make a game self-explaining to players. Take an older game like Final Fantasy VII, with less-than-realistic graphics: it was still praised by critics and players for being engaging and immersive! At the other end of the spectrum, a really good game with stunning visuals like Sea of Thieves is still heavily criticised for its overly complicated controls.

So – this means that there is something else in game design, something fundamental but less tangible than graphics and sounds; and that elusive and hidden thing, my friends, is called affordance.

Affordance is this key concept in design that says the object you make should “look the part”. Roughly put, it’s about shaping, colouring and overall building products that are physically intuitive to use. The handle of a cup, or the bar to push a door, are both examples of good design, because you instinctively know what to do when faced with those objects.

Designers have been studying affordance for a while now, and be it for real or virtual objects, we know it is essential to having the users enjoy your product. It’s about having a good first experience by building upon well-known conventions so that using the object feels natural.

Of course, it’s the same for video games. And in fact, because we have this additional difficulty of “believing in these bare pixels on screen”, it is even more important that game designers understand and use affordance to make the game intuitive to interact with.

Remember, in the old days, when you had some point-and-click games that had those mystifying puzzles that just made no sense? That was actually bad design, because it lacked basic affordance and logic.

Actually, as always, the rule applies: it’s better to show than to tell. Ideally, you’d like for your players to guess all the goals and features of the game without having to tell them explicitly.

So you can colour the door like the key to clearly establish the connection between the two; or even better, you put a wire between the button and the fan! This kind of affordance is not always possible, of course, and there are some genres that completely disregard this intuitive learning – for example, most realistic simulation games just expect you to swift through docs and self-learn a lot. Sometimes, it’s also about balancing the visual hints with plain old over-guidance – some games have definitely suffered from their infamous “paths of collectibles”… But most of the time, interrupting the action to show some big tutorial screen risks breaking the immersion, and so it’s best to just let the players roam free and try various moves for themselves.

Truth be told: most games rely on affordance to engage the players and hook them.

But, to me, one video game that is particularly dependent on affordance is Mirror’s Edge.

What is Mirror’s Edge?

Mirror’s Edge is an action-adventure title released by Dice in 2008 in which you play Faith Connors, who’s a “runner”, or in other words a parkour carrier that has to deliver various messages while evading the government surveillance. The story is set in a dizzying near-future city and has you run from rooftop to rooftop, running across walls or sliding down zip lines, all of this in first-person view. Despite some critics on the trial and error gameplay and the restrictive levels, the game was well-received overall, and people felt pretty immersed in particular thanks to the graphics and sound design.

And this is where affordance comes into play because, as you probably guessed it, with this scenario, Mirror’s Edge is all about speed and intuition. To achieve the best times and get the highest scores on your runs, you’ll need to learn some patterns by heart, but you’ll also need to adapt and react quickly – which means you need to be able to analyse the situation instantly.

The fact that some obstacles are on the ground while others are over your head instinctively has you jump or slide, because our brains instantly assimilate these situations with their real-life counterparts… so, here, the game benefits from common links between the form and the function: this looks like a handle, so you’ll feel like swinging from it, but this looks like a large sturdy pipe, so you should probably dodge it.

Another core element of the gameplay is the “runner vision” that turns close objects on the optimal parkour route into a bright red colour. This allows you to chain acrobatics seamlessly and move faster around the level, and it is a very simple rule to remember as a player. So the “runner vision” of Mirror’s Edge is about introducing a basic systemic link between the “red” and “target”, and making you practice this association until it’s become a reflex.

The importance of inputs and controls

Finally, I’d like to wrap this up by discussing controls and immersion. So far, I’ve described how Mirror’s Edge uses both real-world habits and completely made-up ones to make the game more intuitive and instantly unpackable to our brains. But there is another layer of interaction that has to be just as intuitive if you wish for the player to fully experience the gameplay, and the whole “speed and run” concept: the controls.

Contrary to real-life, where you perform actions by moving your own body, with video games you are asked to move an avatar on screen. This has several consequences in terms of immersion, and it obviously implies a peculiar relationship to this “you that is not you” that moves before your eyes.

Let’s be clear: this is a topic that would totally deserve its own episode, and trust me I really want to do it someday! But for now let’s just focus on one specific aspect of this dissociation: the problem of controlling the avatar.

Responsive controls are another forte of Mirror’s Edge – when you press a button, the character reacts instantly. But the question remains: how do you know which button to press? That’s thanks to an intuitive and well-thought mapping of the keys to the actions.

It’s just like racing games where the right key has you accelerate, and the left key is for the breaks: why does it work? Because it is mapped to the pedals in a car! 😉

When designing a video game, creators have to make their best effort to build on pre-existing reflexes and associations, especially for this intermediary layer of inputs and controls – the video games that fail at this stage can never truly be enjoyable because they constantly break the flow of immersion and separate you from your avatar. Bad controls condemn the player to feeling more like a worker in front of a complex machine than an actor in the story on screen…

So, what if Mirror’s Edge, with all its fast-paced flutters, was a nice example of how good affordance can hook us in virtual worlds?

And please, tell me in the comments: do you really think we’ll have flying post workers like this in the future, that jump and vault around?

I really hope you enjoyed this article – don’t forget to like and share them if you did! And of course, if you have any other idea of games that taught us something without us noticing, go ahead and tell us in the comments!

previousWhy you should use XML data for your Unity/C# games
nextMaking a RTS game #51: Implementing a technology tree 2/3 (Unity/C#)