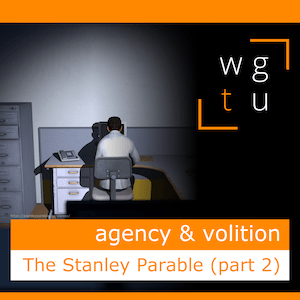 Let’s see how this unique indie interactive drama questions our power of decision!

Last time, we started to talk about The Stanley Parable, this amazing interactive drama invented by Davey Wreden and William Pugh and released in 2011. We saw how its simple gameplay nonetheless carries very strong themes and how it has us question our relationship to fictions and creators, our power of decision and other important psychological notions such as agency and volition.

Important note: again, this episode will contain some spoilers and given that The Stanley Parable is all about story and twists, you should definitely check it out before watching this video if you want to discover it by yourself! 🙂

As we saw in the first part, in The Stanley Parable, the narrator seems to have all the powers. Whatever he says happens, happens. So, in that context, what sort of agency do you have? Can you really act freely and make your own story, or are you condemned to following yet another pre-written path? How many of these seemingly voluntarily acts are actually pre-recorded fate?

Can you impact the world of The Stanley Parable?

This question is crucial because, as we’ve said in this series of videos, interactivity is at the very heart of the video game medium. It’s what sets it apart from movies or books – as the player, you should be able to impact what’s going on and what your avatar is experiencing. So relinquishing all this power would go against the standards of the genre!

Now, don’t worry: you can indeed exert some influence on the world of The Stanley Parable! Despite your limited set of actions, you are still a willing and independent agent that can choose where to go, which button to press… if any. Because in this world, choosing to “not do” is as important as choosing to do, and your choices are what create all the real complexity of The Stanley Parable. To discover all the endings the game offers, you’ll need to regularly decide whether to follow the narrator’s instructions or disobey and explore all the possible alternatives.

But the brilliant idea Wreden and Pugh had is that the story keeps on reacting to your choices, which constantly has you wonder if you truly used agency… or simply walked another pre-written path. For example, rushing through the dialogues and running to the next checkpoint will be noticed by the narrator, and he’ll tell you explicitly you’re going too fast. Similarly, at the beginning of the adventure, if you take the right door instead of the left one, the narrator will say you’re going the wrong way and adapt the narration to get you back on track.

In other words, even though you’ve voluntarily disobeyed the guy’s “orders” and tried to make your own choices, it looks like you’re still under his control and that he can shape the story back to its proper form. And in terms of pure design logic, it sounds pretty clear that game developers can’t code an infinite set of endings and that, in reality, you are limited to living the experiences they prepared for you. It doesn’t sound possible that you break free from the narrator’s control and escape this reality.

But does it mean you can’t find and follow your own objectives, that you are destined to fail and obey?

As soon as you go off-track and create a new story branch, the narrator will react instantly by telling you that “you were supposed to” do this or that, or that you should “stop trying to make every decision by yourself”. Ultimately, he might also point out that, now that you’ve diverged so much from the original scenario, you must feel pretty lost and “have no idea where you’re going or what you’re supposed to do right now”.

This mockery has a real impact because it’s addressed as much to your character, Stanley, than it is to you, the player. And this is where the game shines once more: by its savvy use of the fourth wall, it gradually pulls in the story and immerses you into this infinite loop.

A game that breaks the fourth wall

You know, the fourth wall is this notion of an abstract invisible fourth wall on the scene of a theatre that separates the actors on stage from the audience, and isolates the fiction in its own reality. It’s what prevents you spectator from impacting the story, and the characters in the fiction from talking to you directly. While it’s a very common rule in art, it’s of course also been played with many times and plenty of other fictions rely on this breaking of the fourth wall to create special situations where the audience is brutally immersed in the story, one way or another (The Purple Rose of Cairo, Deadpool, Spider-Man…).

By its very premise of having an active and almighty narrator, The Stanley Parable obviously sets up a unique narrative context. It expects you to learn to distrust this omniscient voice and rebel against the status quo, which in turn means assuming the story as it is shown to you is just the tip of the iceberg and there is more to discover! You can safely suppose that there is much more interesting and complex thoughts interwoven in this “in-between” between the story on-screen and your experience as a player…

And so this is where the game takes advantage of regularly breaking the fourth wall to directly talk to you. It’s still told to Stanley, but this abstract narration will soon start to talk about you rather than him.

For example, we’ve talked before of how the narrator reacts to your choices and adapts the dialogues to better fit – well, as you restart new sessions and get reset to the initial corridor, the dialogues will also mutate to evoke the “distant memory of Stanley’s office” that is fading in his memory… just as much as it is fading in yours! Similarly, the narrator’s voice will sometimes mention this as being “a video game”, or note that this is “not a cutscene”, or that this is an “unfinished level” with “developer textures”: all those elements are non-diegetic notions that a player can understand but that a video game character couldn’t possibly conceive.

Your experience as a player is therefore far greater than what the Stanley in this iteration knows and every new loop adds to the previous ones.

In a story branch, the narrator takes you to “other games” that are both deliriums of his own invention or well-known games such as Minecraft – this shows that the story we’re told is not about the corridors and buttons we’ve seen so far but that it works at a higher level, and in other worlds, too.

In another loop, the voice makes it as though your character, Stanley, is the one who created this simulation, with all its possible paths and choices, so that he could leave his role of observer and become a real actor in his own life. At that point, The Stanley Parable uses the technique of mise en abyme to have you, the player, reflect upon who really creates the story in a video game…

And in yet another iteration, Stanley is described as questioning his own sanity, which forces you to stop and pause. So far, we got descriptions via the narrator, but we got visuals via Stanley: what if it was this second intermediary that was feeding us false info? This possible craziness is justified by a series of clever puns at common video game tropes: doors closing automatically, the fact that you can’t see your feet, familiar repeating rooms, an impossible voice in your head narrating all your actions, etc. Once again, it’s about colliding Stanley’s reality with your own and blurring the line between what is in and outside the story.

To me, the final cherry on top is when, at the bend of a sentence, the narrator lets slip that “he simply plays his intended purpose, the same as Stanley”, that “he is compelled” to doing things, too… or when you later even get a second narrator commenting on the actions of the first one, and a completely fourth-wall breaky room with credits, Steam Greenlight, facts about the game’s team and other dev assets exhibited in a museum…

… or when the narrator realises than you are not Stanley but a real player behind their screen and starts speaking to you directly as you break down the narrative logic!

So: what if The Stanley Parable and its never-ending narration were actually an incredible opportunity to question our capacity of volition and agency?

And please tell me in the comments: what if the narrator was right and this was indeed a pretty nice set to spend eternity in?

I really hope you enjoyed this duo of articles – don’t forget to like and share them if you did! And of course, if you have any other idea of games that taught us something without us noticing, go ahead and tell us in the comments!