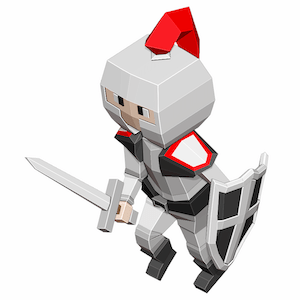 A while ago, I shared a few low-poly model timelapse videos. It was really interesting to discover this type of modelling and I was really happy with the first results.

But, going back to the great Imphenzia’s YouTube channel and re-watching some of his videos, I decided I would take it one step further – this time, I modelled a low-poly knight character and then rigged and animated it! 🙂

About this 3D model

To do this, I followed Imphenzia’s short series of videos on the topic and then re-adapted the low-poly police officer character from the tutorial to transform him into a knight.

The mesh is coloured using Imphenzia’s usual technique: we take a small palette of 8×8 colours and directly place the UVs corresponding to the various faces of the mesh on the right colour to instantly colour a part of the character 🙂

For turning the police officier into a knight, most of it was about changing the colours, adding some geometry to the knight’s body (while staying within the low-poly common ranges!) and, of course, modelling the extra objects: the helmet, the sword and the shield!

The helmet can be made easily just by duplicating the knight’s head faces and then separating them to another object. Then, by scaling it up and creating some depth with an extrude, you directly get a fitting helmet for your character.

I made the sword and the shield out of basic cubes, always keeping the low-poly style and the basic mesh colouring:

In his tutorials, Imphenzia also shows how to rig the character with a basic human skeleton. All in all, it’s about placing bones for the limbs (upper and lower arms + hands, and upper and lower legs + feet) and for the torso, with enough subdivisions to properly control the different parts of the mesh when animating.

The trick to make animation easier is to also add some inverse kinematics (IKs) on the lower part of the rig, for the legs. By adding these IKs, you can then easily “stick” the foot in a given position and have the rest of the body adapt by bending the bones above:

With this rigging done, by finishing up Imphenzia’s series and taking some references online, I then prepared some basic idle and run animations:

My goal with this model was to get something really low-poly but still cartoony and nice to look at… and to get a rigged and animated asset that can be used in my video game projects, like my RTS tutorial for example 😉

Another incredible thing with Imphenzia’s workflow is that it gives you very transferrable components: the armature, the animations and even the clothing can easily be interchanged between your characters, and you can thus very quickly get a whole bunch of rigged and animated low-poly characters!

So yeah – I don’t plan on stopping there… and I want to continue on making other low-poly characters from various genres: medieval RTS games like this knight but also sci-fi, modern environments, etc. 🙂

Do you have ideas of characters I could make? Feel free to share them in the comments!

previousRe-coding Pong in 30 minutes! (Unity/C#)
nextHow I automated the marketing of my Blender 3D models (1/2)