Welcome to the playground! 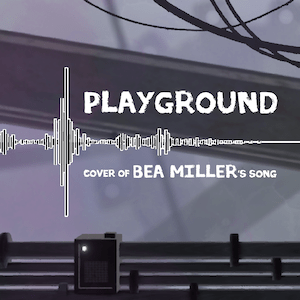 A new musical cover from the Netflix ‘Arcane’ soundtrack

Today, here’s a bit more Arcane frenzy turned into song – this time, it’s a cover of Bea Miller’s “Playground” title, from the very first episode of the series!

I’ve also had some fun with the cover artwork. To make this image, I created a small 3D scene and added some filters to get more of an “oilpainty”-Arcane vibe… If you’re interested, there are more details on how I did the artwork below 🙂

For this new musical cover, I didn’t work on a full-fledged video clip like last time (with my cover of Imagine Dragons & JID’s “Enemy”). Instead, I focused on doing a single artwork to convey some of the “dark” and “smoky” feelings Arcane inspired me.

This was a really interesting render because I wanted to do something in the Arcane-vibe but without copying the series art style (I mean: apart from the fact that I can’t actually make something as amazing as Arcane by myself, I also wanted to find something a bit personal!).

Contrary to some of my previous Blender renders, this time, the artwork was made in two phases: first, the actual 3D image outputted by Blender, and second some filters and post-processing in Krita.

Note: by the way, both those tools are completely free and open-source! 🙂

Setting up the scenery

The first step was to design the different elements I wanted to show. I instantly thought of some large metal beams and big wheels because Arcane’s cyberpunk aesthetics are clearly one of the things that struck me the most in the series.

Then, I also thought of the importance of gas, smoke and fluids in the story, and I thought I’d add some pipes to the structure.

When I designed this scene, I had a theatre scene in mind.

I wanted the final image to give a feeling of depth and fuzzy boundaries, as if you couldn’t really tell where what you’re looking at begins and stops…

To do this, I worked with a “depth-layer” process: I separated my different elements quite a bit along the forward axis and then exported each “layer” on its own. This gave me a lot more freedom during the post-processing phase!

Here, the orange arrow indicates the forward direction of the camera and the red lines show the different “layers”.

Step 2: The post-processing in Krita

Arcane is famous for its unique visual style. Be it with the character design or the image render technique, Fortiche and Riot have clearly managed to find a very personal and recognisable identity for this series!

I didn’t want to copy this exactly, but I really liked the “painted sculpture” look; so I decided to play around with some of Krita filters to try and make something a bit more crude than the clean 3D output.

I eventually went for the built-in “oilpaint” artistic filter and tuned it to add some nice brushy posterisation to my CG render.

To give you an idea, here is the basic 3D render without any filter, and then the same with the filters:

The difference may be subtle in some places, but I think it really contributes to the overall underground vibe I wanted for this artwork 😉

A stack of layers…

As I said before, exporting my 3D image in multiple “depth layers” allowed me to play around with them more freely during post-processing.

In particular, I did two things:

The adjustment layers help exaggerate this feeling of depth (top: without the layers, bottom: with the layers):

The brush spots are a lighter touch but they participate in the grunge-vibe (top: without the watercolor brush spots, bottom: with the spots):

In the end, all that was left was to overlay the song info (the title and original author) and the sound wave…

This artwork was a great opportunity to work both on my set dressing skills in CG, but also improve my knowledge of Krita and the possible post-processing filters or effects.

I really you enjoyed the musical cover and the artwork – and by the way, if you want to discover more of my CG stuff, be sure to check out my dedicated Instagram! 😉