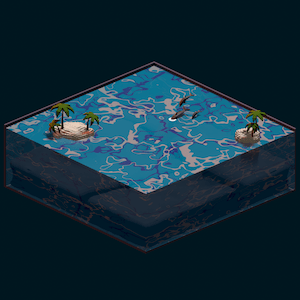 A new low-poly/voxel-like scene with a few islands and some dolphins!

Today, here’s a new episode in my series of “Voxelish” renders! As usual, my goal with these creations is to make a basic scene that mixes up low-poly and voxel art styles. I’m trying to have a personal take on voxel art rules by adding some more cartoonish- and simplish-visual effects 😉

In the previous posts, I showed you a little valley and a city in the clouds…

This time, it’s a small marine scene with some islands, and even a few dolphins! Make sure to watch until the end 🙂

Making and colouring the terrain

Just like in the previous episodes, I made the terrain out of displacement maps and geometry nodes: this allows me to easily transform a subdivided plane into a terrain made of a bunch of cubes that simulate voxels.

Then, I applied a shader with a gradient colour that is mapped to the vertical coordinates of the vertices coordinates in the mesh:

This way, I get a set of colours stretching from bottom to top of my terrain:

Also, this scene contains several objects to populate it: the rock arch, the pillars, the palm trees on the islands and the dolphins. The arch and the pillars are part of the terrain itself, but the rest are separate meshes that I modelled myself 🙂

Here is a little turn-table of the dolphin model, in a low-poly style:

And here is also a screenshot of the two palm tree models that I spread across the islands:

Note: if you want to get these assets and lots of other low-poly trees, you can check out my models on CG Trader! 🙂

Just like for the plane in the first render, I used a bézier curve to make a path that the dolphins can follow over time. I also re-used the same tricks as I explained for the spaceships in the previous article:

Adding rings in the water

Finally, to add a bit more cartoon-like effects, I created little rings at the surface of the water where dolphins dive back into the sea. These were made like the smoke or the clouds in the previous posts: I had a toon shader and a displacement modifier hooked to a target, so that I could “animate” the ring easily over time.

But this time, I also played with the scale of the ring and I added some transparency to have the ring fade out, and so that we feel like it’s dispersing in water:

This project is still teaching me a lot about 3D and scene setup – this time, it was particularly interesting to work on the modelling and the animation!

If you want to keep up-to-date with my CGI projects, make sure to follow me on my socials and in particular on my 3d-dedicated Instagram 😉