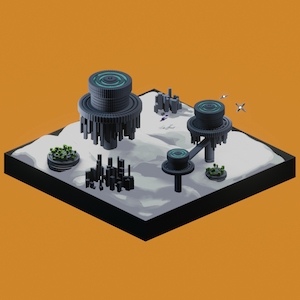 Last week, I started a new CG series about voxel art: “Voxelish”. Throughout this project, I’m going to create little scenes in a low-poly/voxel style.

My goal with the “Voxelish” project is to create personal scenery and animations by mixing up isometric references and low-poly modelling with voxel art. I’m not following all the voxel art rules by the letter but rather drawing inspiration from it and adding in some cartoonish-styled models or visual effects.

So today, here’s a new render of a futuristic city in the clouds with some spaceships: Kuraudo City!

The overall workflow was similar to the one I had for the first render in the series (the little valley I showed in the previous article).

I began by placing the clouds and the box, then I worked on my main “buildings” (the towers in the middle of the clouds); I eventually added the trees and the spaceships.

There are, however, a few additional tricks behind this render… 😉

When I first had the idea for this second render, I actually had only this vision of “blocky” cartoonish clouds floating about and moving slowly.

At first, I simply copied back the shader I’d used for the smoke in the first episode, because I wanted to have the same effect for this “fluid”. But I had to add a second shadow colour to my shader, otherwise I was losing way too much details of the clouds surface!

So my cloud shader is finally a 2-bands toon shader:

The animation is done like in the previous post, with a displacement modifier that uses a target as origin and that “shifts” as the target is translated through the scene:

One important effect in this render is how the towers are “building” up gradually, block by block.

This is quite easy to do in Blender, thanks to the aptly named “Build” modifier. This modifier can be applied to any mesh and simply shows the faces in your model one by one according to a given ordering (it usually depends on how you first built your model but it can be recomputed or set to random).

You can see a little demo in the Blender docs:

The animation of the spaceships relies on bezier curves and the “follow path” object constraint, like before! But this time, since I had three models that followed the same curve, I also needed to add a little bit of “randomness” to each so they wouldn’t have the exact same trajectory.

I actually had each ship start at a different time (so they appear on-screen one after the other). And most importantly, I moved them around the curve a bit – this way, they follow the path but they are slightly offset. This local translation changes throughout the animation which makes for the nice effect of ships coming closer together or getting away; this gives a more “natural” effect.

Also, I played around with the size of the ships to trick our brains into thinking the landscape is “deeper” than it actually is: by having the ships scale down quite a lot as they go towards the city, I make the viewer think the city is far away from the camera and therefore pretty huge. This visual illusion is simple but it works great for creating false perspectives.

This second render once again taught me a lot about 3d; this time, I had to re-work my cartoon shader for the clouds, use Blender”s “Build” modifier and play around with visual illusions….

If you want to keep up-to-date with my CGI projects (be it “Voxelish”, my low-poly modelling or photorealistic art renders), make sure to follow me on my socials and in particular on my 3d-dedicated Instagram 😉

previousVirtual gallery #3: Discovering the hall
nextHow to use math noises for procedural generation in Unity/C#