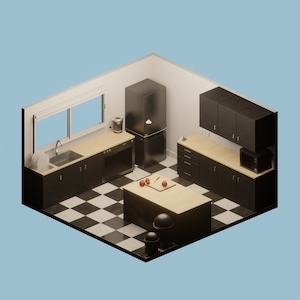 Today, here’s a new isometric room to continue my series on 3d isometric architectural design. Like in the first render, I looked for an original way of mixing up the various iso-kitchens I could find on the net and worked on a day-versus-night scene animation.

Plus some still shots of the “finished” day and night scenes:

Most of my workflow was similar to the one I used for my first iso-animation: I first gathered assets (both some CC0 resources and my own craft), built the scene and looked for a nice way of animating everything. I then worked on the night scene and decided to place some additional lights to better compose the final shot.

Once again, I wanted my models to be simple and most of the realistic-style to come from textures. I took another look at ambientcg.com and did some (free) shopping… in particular I got this really sweet tiles texture for the ground 😉

Also, the tomatoes. Those were not initially part of the plan… but I eventually realised that the scene was lacking red! Meaning that in terms of image composition, I needed to balance out the harsh light of the fridge with something. Since the central table was pretty empty, I searched for an idea that would create a second focus point.

This project is great because it continues to widen my 3d/CG skillset! This second render mostly had me working on composition: I had to find the best place for all the objects, the proper amount of assets to put without overloading the scene and a nice lighting to carefully orient the viewer’s eye to specific points of the image.

So – do you like it? Do you have some ideas of other rooms I could make next? Feel free to react in the comments, or on my Instagram! 😉