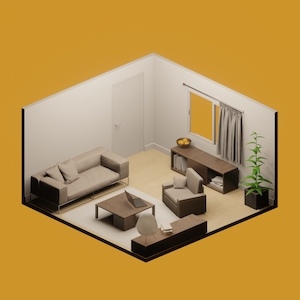 It’s been a few weeks now that I’ve taken back 3d modelling and CGI renders. I’ve explored various types of rendering, from photorealistic to low-poly, but there is one particular type of image I’d always wanted to try and had never actually dived into: 3d isometric architectural renders.

My preliminary research on Dribbble, Pinterest and Artstation showed me that while there are quite a lot 3d artists doing isometric room renders, there are less creations with textures, animations and lighting at the same time. And those renders were the ones that I liked the most… So I decided to go for the full thing: I would make a short animation of a simple but textured room with some interesting lighting.

Here is my first iso-architecture creation: “The living room”… make sure to watch until the end 🙂

Another version with a “hand-drawn style” on the first part of the sequence:

And here are some additional still shots of the “finished” room at daytime and night-time:

Since this was my first ever isometric interior architecture design, I first had to figure out a viable work process. Below are the different steps I took to produce these renders.

Creating and populating the room

The room in itself is simply a set of 3 deformed cubes: a floor and two walls. For the door and the window, I used the Blender built-in Archimesh package that lets you very easily and quickly design architecture scenes.

Also, to lighten the load of modelling, I took some pieces of furniture from CC0 assets websites like Blendswap; namely the couch, the armchair and the curtains. I modelled the rest of the assets myself 🙂

Moving the objects around

A key part of this rendering was, of course, the animation of the various items in the scene. Besides finding the proper order for the room to fill up in a logical order, I also had to find a way to get this “smooth” vibe I’d seen in some reference renders. I wanted the objects to look a bit like play-doh and seem “soft” to the eye.

To do that, I used delays, stretching and shrinking extensively. If you look at the above GIF carefully, you’ll notice that pretty much all of the movements and scale ups have some damping at the end. When objects fall from the ceiling, they are squished a little along their vertical axis upon touching ground; when the floor scales up at the very beginning, it slightly overshoots its final size for a brief moment, and then shrinks back to it.

All of these tricks are what give the overall “small-sized model” effect: you feel like all the objects could be deformed and shrunk under your fingers, as if they were made of gum 😉

Another important thing (that I mentioned in a previous article about the making-of of the 3d exhibit visit of Cali Rezo’s “Nid/Nest” series of paintings) is that, ideally, nothing should really happen at the same time. That’s what makes it this lively! By delaying a bit all the actions so that oranges fall one at a time, and the books don’t necessarily travel at the same time, and the couch goes over the carpet that has just unrolled, you hook the viewer and better catch his/her attention.

Adding some textures… or not?

In order to get my main render (the one with the full textures and lighting), I had to find and apply nice textures to my objects. This would bring life to the scene and make it more believable (even though the geometry is simple).

Once again, I went for free CC0 assets that I got from the excellent ambientcg.com database! On this website you can get hundreds of different materials, all in high quality and with multiple texturing maps (colour, roughness, metalness, displacement, normal…).

Obviously, at one point, I had my scene almost ready but without any texture – all objects just had a plain white material:

And I thought this would be another interesting lead for more “stylish design” images… so I worked on two versions of my scene in parallel:

Since my geometry isn’t too complex, I could very quickly toggle on and configure Blender’s Freestyle rendering tool. This built-in feature allows you to ask the rendering engine to add a little post-processing step (just before the actual compositing) that computes “the contours and silhouettes” of your objects. You can further specify what edges in the scene the renderer should take into account or ignore; and you can configure the line style (its thickness, its colour, etc.).

Pretty cool, right? I think the Freestyle effect really helps the eye when everything’s white (compare it to the previous picture – it’s way more pleasing to look at because you’re not as lost thanks to the contours) 🙂

It’s a completely different style from the one I got in my “main” scene, but I’ll definitely keep this other type of renders in the back of my mind!

Finally, I had this idea to make two ambiances for my scene: a daytime/”basic” lighting and a more complex night-time scene where, instead of having a global artificial point light, I would directly use the various assets in the room to light it up. Each setup has its advantages and drawbacks:

Since I was making an animation, I knew I could benefit from both by first showing the scene in daylight as it was building (so the viewer would understand the volumes and meshes properly) and then swiftly switch to a more “filmic” setup.

For the night scene, I added some area lights for the door, the window and the computer screen; the paper lamp uses a basic point light that shines through the semi-transparent paper material.

In terms of composition, I played around with colours so that I would get a pleasing “final image” (meaning the end of the sequence that stays still for a while). I wanted to oppose a soothing interior to a cold exterior and get this ambivalence through lighting. The trick was to have warm orange lights for interior light sources, and white or blueish ones for the exterior. The computer screen is the exception, and acts more as a focus point to recenter the focus in the middle of the image. This orange/blue opposition is a well-known colour scheme called the complementary colours scheme. Of course, the change of the colour in the background further supports the lights in this role.

Note: if you’re interested in learning more about colours and their importance in CGI, I’d really encourage you to check out this video by Andrew Price (from Blender Guru) 😉

This new project is really fascinating in how it forces me to think in various ways: I need to make some interior design, then a bit of 3d modelling/UV mapping/texturing, then the animation of all the objects with attention-grabbing but smooth movement curves and finally the lighting and overall composition of the scene.

It’s a great way to improve on all those skills while actually producing a small-sized narrow scene.

Do you like it? Do you have some ideas of other rooms I could make next? Feel free to react in the comments, or on my Instagram! 😉