A peek at cellular automata (1) 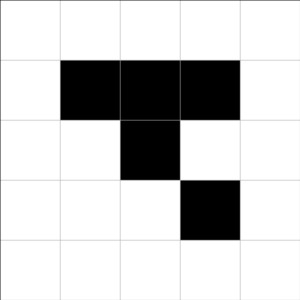 To follow up on evolutive models, I wanted to talk about cellular automata. Broadly speaking, a cellular automaton is a discrete model that is defined by a grid of cells – each in a given state – that changes generation after generation according to one or more evolution rules.

When modeling our world, it is common practice to discretize things. Why? Because it makes things simpler and computable for our machines – you can’t really simulate an infinite number of points! We usually discretize space- and / or time-wise.

And since one picture is worth a thousand words, here is a small illustration of both discretization, and of the mix:

In cellular automata, we do both discretizations:

The idea is to start from a given initial state and then have the grid evolve iteration after iteration.

A famous example of cellular automaton is Conway’s Game of Life – designed by John Horton Conway in 1970. The Game of Life consists of cells that are “alive” or “dead”; then, at each step, the new state of every cell is defined by the states of its neighbors, depending on the chosen rules. These rules are:

Conway’s Life is a deterministic process: after setting an initial state and the rules to apply, you know exactly how the automaton will evolve at each generation. Plus, launching the process two times in the same conditions will result in the same outcome.

Since it was invented, it has been studied a lot and over the years some patterns have been found. In particular, people have identified 3 pattern types: the “still lifes” (that stay exactly the same, no matter how long you wait), the “oscillators” (that evolve with the rules but in a periodic way, so that they always go through the same steps) and the “spaceships” (little blobs that glide and fly around). It is even possible to have “guns” that produce spaceships! You can see examples of these on the Wikipedia page.

What is very interesting with Life is that is a chaotic process, i.e. a tiny change in the initial state can result in completely different outputs after only a few iterations. For example, compare these two initial states: 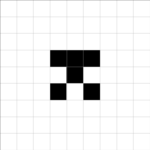 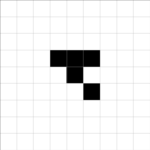 Well, for a given set of rules, after 200 iterations, these two starters evolve into completely different models:

It has been shown that Life is as powerful as a universal Turing machine, meaning that any algorithm can be simulated by this automaton. But this also means that the Game of Life is undecidable: when you take an initial state and a specific pattern, you have no way of asserting this patter will appear.

Plus, it’s also possible to make Life create… Life. Basically, you can have a Game of Life instance where each cell is itself a small instance of Game of Life!

A bit of code to create Life!

Here, I give some Python code to simulate the Game of Life.

If you just want to see some results, you can use it like a black box and don’t need to change anything in the code; just use the command line arguments to specify your Life’s parameters and create a new simulation – it will automatically be exported as a gif animation in the end:

You can also get this list of all possible parameters by showing the program help with python main.py --help.

So, for example, to create a simulation of Life with a 200×200 grid that runs for 100 iterations but four times as fast as a “normal” instance (meaning it takes 4 steps at each iteration), you would run the following in your console:

Here is an animation I got with these parameters:

Of course, by default, the script randomly initializes some cells in the middle of the grid to an “alive” state… so depending on your rules and on the run, you may get a model that evolves for a lot of iterations or that dies really quickly. If you want to have a specific initialization, you can use the init parameter with one of the following values: 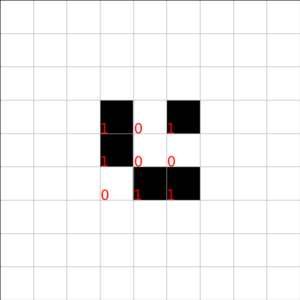 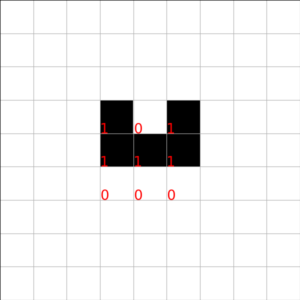 If you dive into the code a bit more, you will see that you are provided with some functions in the patterns.py file to make special well-known patterns of Life (oscillators, spaceships, etc.). You even have a generic make_pattern() method that will redirect to the correct generation function. Take a look at the init_grid() function in the main.py file to see how they are used!

It’s also possible to have more than one type of alive cells (represented by different gray tints); for example, here is a simulation with 2 types – we can see it as two populations competing for the same piece of land and eventually growing away from each other:

Example of Life simulation with 2 types of “alive” cells

Want to learn more about the Game of Life?

There is still a lot more to tell about Life!

Besides changing the birth and survival rules, you can also have other variants: some systems take hexagonal cells instead of square ones, some go from 2D to 3D, the discretized space can be periodic (meaning the cells that “go out of bounds” on the right can reappear on the left), you can consider more states than just the two “dead” or “alive”…

Life has even been used to create music by generating MIDI patterns!

Anyway, if you want to see a great video about the Game of Life (in French), I suggest you look at Science Etonnante’s, or if you prefer you can read the article that goes with it (David Louapre is truly one of the best French popularizer of science I know!).